There is a good web page about Down House a century ago. 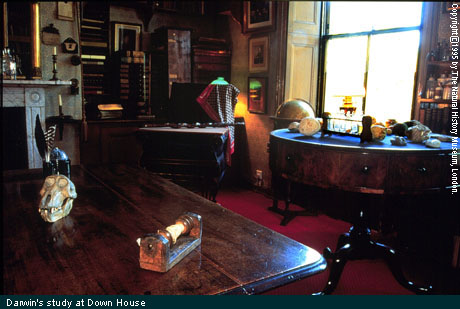 Only 16 miles from the center of London, in Downe, is Charles Darwin's home, Down House, now under the management of English Heritage.

His study, where he did most of his writing and microscope work, has been recreated from photographs. His "Sand Walk" for his daily walks and "thinking time" is open, out in the back of the large lawn and grounds.

The house and grounds are a thoroughly nice place to spend an afternoon.

Notes from William H. Calvin, University of Washington in Seattle

The NOVA series on Evolution, all eight hours of it, originally aired on PBS from September 24 to 27.  I am one of the dozen science advisors for the series, especially the sixth program, "The Mind's Big Bang."  Science teachers should sign up for the instructor's manual.

An excerpt from my forthcoming book, A Brain for All Seasons:  Human Evolution and Abrupt Climate Change which involves paleoanthropology, paleoclimate, and considerations from neurobiology and evolutionary biology.  It will be out in Spring 2002 from the University of Chicago Press.

I'm starting this little tour at Darwin's home, sitting at a park bench under a magnificent oak tree that dates back to Darwin's time here. Five years after returning from the voyage of the Beagle, Charles Darwin and his young family moved from central London to a pleasant country home about 16 miles to the southeast, near the village of Downe. He lived here forty years until his death in 1882. No more voyages around the world, not even trips to the Continent, but Darwin had correspondents everywhere, and sometimes they showed up at his door.

And it was here at Down House that he raised pigeons, studied earthworms, and dissected barnacles. Here he sat, pen in hand, and wrote out his books that provided so much of our modern understanding of how nature came to be the way it is. But only ten years ago, a scientific pilgrimage to Darwin's country home was remarkably difficult, unless you got directions from someone who had been here before. Only the most detailed guidebooks had a mention of Down House, and then only in the fine print. Get off the train from London at Bromley South or Orpington, and the taxi driver, upon learning your destination, would knowingly suggest that there were much finer country homes to visit than Down House - clearly not understanding that it was Charles Darwin that made Down House so important, not its gardens.

Arrive, pay off your I-told-you-so taxi driver, and you'd find a low budget operation financed over the decades by the London surgeons, with only several rooms restored to what they were like in Darwin's day, back before the place had been turned into a girls boarding school in the early 20th century. There were a few rooms filled with old-fashioned museum cases laden with a dozen coats of paint, but most of the house was in sad need of repairs and unsuitable for visitors. And this for one of the great scientists of all time, not just one of England's greats.

Still, it was enormously inspiring to anyone who understood the intellectual triumph of Charles Darwin, this chance to see where he had thought it all through - his study with his microscope, his chair by the living room fireplace, and his "sand walk" out back, where he went for three walks a day to digest his thoughts. Often, one supposes, Darwin sloughed through the fine English rain, likely blowing in from the west after forming above the warm Gulf Stream.

Most people who think a little about evolution are wedded to the basic idea of gradual improvements in efficiency - and not much concerned with the origins of what was later improved (it was just "mutations"). Yet it was Darwin himself (a point omitted from even the modernized science exhibits at Down House) who first cautioned readers about getting fixated on efficiency, and who - at the same time - offered a route for invention. He noted that changes in function could be "so important," that an anatomical structure improved for one function could, in passing, serve some other function that utilized the same anatomical feature. (Darwin's example was the fish's swim bladder serving as a primitive lung.) Novelties come from those nascent secondary uses, not from a bolt out of the blue, as a cosmic ray mutates a gene.

IF YOU HAVEN'T SEEN DOWN HOUSE since the reopening in 1998, there's a lot more to see, thanks to much fund-raising by the British Museum. It is currently operated by English Heritage, which issues timed tickets (phone ahead) and provides audio wands to guide you through the rooms.

Next to Darwin's study, there's his billiard room, where cause and effect operated on a simpler, more direct, level than it does in biology. Across the hall is the large dining room with its bay windows; it was also the "justice room" where Darwin served as a magistrate on occasion. The now-rebuilt stairway to the upstairs leads you to a series of former bedrooms, filled with modern exhibits about Darwin's science.

Darwin traveled into London for scientific meetings, but mostly he kept up an enormous correspondence. His was something like the modern "home office" style of working, that computers and communications are making possible even for scientists without inherited wealth. Darwin's life shows you another style of doing science, one without classes to teach or students to supervise, without grant applications to write, one where piecing together the big story operated alongside the careful dissection of barnacles, digesting it all on yet another loop around the Sand Walk, carrying a great stick which he struck loudly against the ground, making a rhythmical click as he walked along with a swinging gait.

More at the book's web site.

By Train and Bus: From London's Victoria Station, buy a day return ticket for Bromley South; trains are frequent. At Bromley, take Bus 146 to Downe (except on Sundays). Down House is about a five minute walk up Luxted Road from the village. A cab from Bromley is about 9 pounds each way.  Or go via Orpington, walking or taking the R2 bus from the train station, which goes directly past Down House.

Driving Directions: Take the A21 to Bromley and Orpington; Down House is signposted at Farnborough and on the A233 near Biggin Hill.  Good maps at www.streetmap.co.uk or www.multimap.co.uk which use Ordnance Survey mapping; the latter also provides aerial photographs.

The Natural History Museum, ex-BM(NH), took over the museum in 1994, then transferred it to English Heritage. See the article, "Keeping Up Down House," in Natural History (8/96).